Avocado in Spain, varieties and care-Irrigation with sensors / probes

Plantae is dedicated to the design, development and commercialization of wireless sensor technology to save water and improve crop production. For this reason Plantae sensors conquer avocado plantations in Spain .

We are going to comment on its varieties and the care that this tree needs, which has such a special fruit and is recognized as one of the basic foods for good health.

Also the importance of controlled irrigation to improve quality.

Plantae does not sell avocado plants or advise on the variety or type of avocado to plant in your area or region. Our article is informative about subsoil humidity and temperature sensors and probes to apply precision agriculture in all its phenological state.

Avocado cultivation and its phenology is more complicated than that of other fruits . We are going to assess some factors that we must take into account:

The ideal climate for avocado cultivation is for it to be tropical. Much heat and humidity of the subsoil controlled.

The roots of the avocado are not very deep, it is not a tree that can seek moisture from the interior in times of drought and yet it needs to have moisture so that the fruits are of quality and accumulate the precious fat that characterizes them.

If the humidity around the roots is excessive, it will quickly grow fungi. It does not want puddles because its root system is very sensitive and they rot easily.

It is greatly affected by water stress , for all this the control with humidity, temperature and conductivity sensors and probes Plantae are giving extraordinary results in the plantations, as long as the area has the possibility of irrigation especially by drip.

In addition, water and energy are saved and this is very important in production areas that need control of irrigation water an increasingly scarce good.

In the north, the humidity is usually due to rainwater except in summer that needs irrigation and must be controlled by what we have already commented. Also the relative humidity and the flow rate of irrigation water with a flowmeter which also detects possible breakdowns.

(+INFO on "Wireless sensors in avocado-The best for irrigation control")

It does not want clay soils because they are heavy and tend to suffer from puddles that are not recommended for this tree because the roots could not develop sufficiently. They would be left even weaker than they already are on suitable terrain.

The preferred soils are light soils, that is to say sandy and sandy loam, as indicated in the following diagram. If they are sandy they need an enrichment to nourish the plant. If there is good irrigation control, it is better adapted to all types of terrain.

In short, the keys to its cultivation are:

Most cultivated varieties of avocado in Spain

The avocado belongs to the Lauráceas family just like the laurel, cinnamon and camphor. The three species that this tree presents are:

Avocado in Spain is grown in Malaga especially in the Axarquía region, in Granada and the Canary Islands because it needs a subtropical climate.

Its cultivation grows exponentially. It begins to be cultivated in Huelva, Cádiz, Almería, Murcia, Alicante and Valencia in areas that have few frosts, due to the great demand that avocado is having in our country and in Europe, especially in Germany, France and the United Kingdom. 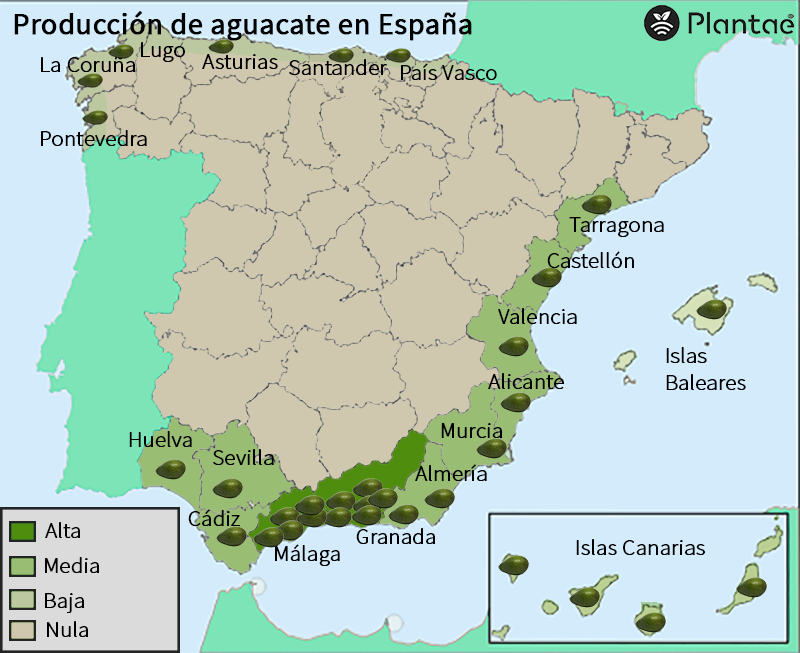 It also begins its cultivation in the north, on the coast to avoid frost.

Our production has the advantage of being able to reach the national and European markets in a very short time, unlike those from Chile, Colombia, Mexico, Peru and Israel.

Many farmers are betting on their cultivation and removing plantations from others that are being less profitable.

Also in the north, especially on the coast to avoid frost.

The avocado, «the third testicle» of Spain

Avocado is a derivative of « ahuacatl» which means «testicle» in the indigenous language. Given the increase in its production in our country, it is known as the third Spanish testicle.

The properties of this fruit are very broad:

Typical avocado recipe ideal for making toasts, easy to make and healthy, because it counteracts the saturated fats that we ingest in multiple foods.

After we beat a few seconds:

We mix everything and enjoy.

It can be combined with salmon, tuna, anchovies to taste.